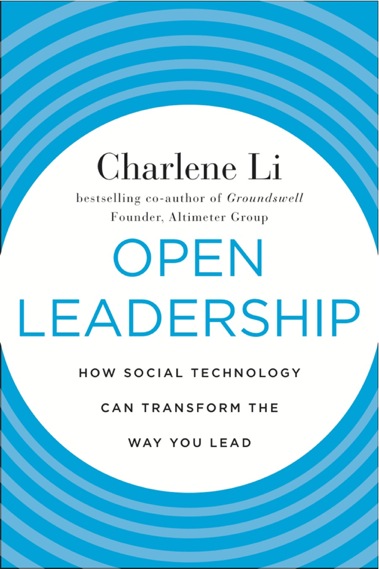 Charlene Li, founder of technology research and advisory firm Altimeter Group, is perhaps best known for the best-selling book “Groundswell: Winning in a World Transformed by Social Technologies” in which she co-authored. Her new book is “Open Leadership: How Social Technology Can Transform the Way You Lead“, and I was very fortunate to be able to receive an advanced reading copy when I responded to her call for interested reviewers, before she limited it to US-based reviewers due to overwhelming request.

First, a confession – this review came out really late, over a month after it officially launched in the stores. My excuse is that I simply had to read it from cover to cover, and again, in order to glean the gems from within. Now that I’ve gotten that aside…

Despite social technologies such as Facebook and Twitter (or what Jeremiah Owyang aptly terms the ‘vuvuzela of the Internet’) taking over our lives, many organizations still prefer the adopt a ‘head-in-the-sand’ attitude when it comes to dealing with this space. In the book, Charlene says that ‘greater openness is inevitable’ and argues that leaders of organizations need to ‘let go to gain more’. It also provides a guide on how any organization and its leaders can change and open up their organizations.

Instead of ‘reviewing’ the book in the usual way, I thought I’d look at three of the most common myths about social technology adoption and how the book would have answered them:

1. Openness (to social media) is not for everyone.

It is. It’s just a matter of conducting an openness audit and deciding which levels of the Engagement Pyramid do you engage with people.

I like the example Charlene made of the US Navy, which had invited her and other bloggers – including Guy Kawasaki and Robert Scoble – aboard the U.S.S. Nimitz, an aircraft carrier. You would think that there’d be a lot of secrets to hide about one of the Navy’s most powerful weapons, but they were incredibly open. You can find out how open here at Guy Kawasaki’s post on that junket.

Social media is measurable in both tangible and non-tangible ways. The trouble is that there are still many marketers who tend to fall back on traditional ways of online measurement, which is unreliable at best. Charlene highlights how some companies have embraced new metrics, such as Net Promoter Score (NPS), for measuring new relationships.

3. Not every company is set up to benefit from adopting social technology.

This is probably true. An organization that already has an open, collaborative corporate culture benefits most from social technology. After all, you can’t shake hands with a closed fist.

Charlene highlights the example of how Cisco Systems benefited financially through their Web 2.0 collaborative initiatives. The networking company literally saved millions through remote collaborative and telecommuting tools, such as its TelePresence video conferencing tools and real-time desktop-sharing solution WebEx. But this is an example of a forward-looking company that decided to embrace openness.

You can find out more in this Slideshare presentation:

Last month, I was invited by Intel to share with some of their public relations and marketing people from the Southeast Asian region who were in town about social media technologies and how a company like theirs can leverage them. If “Open Leadership” had been out then, I would have saved a lot of time and energy by just telling them to read it.