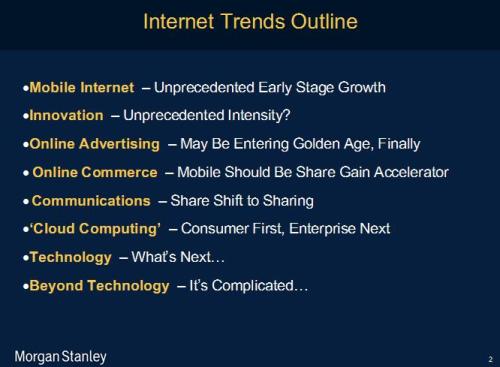 If you’re a developer – or, heck, anyone who’s interested in the Internet, mobile, media or technology space, Morgan Stanley has recently released an Internet Trends presentation with some insightful data.

In particular, the global finance advisory firm highlights the explosive growth of mobile Internet – e.g. use of mobile applications and mobile browsers by U.S. smartphone users have doubled from 18-percent in April 2009 to 38-percent in April this year. And since the iPad was introduced in April, there are already 5,000 iPad applications for the tablet, racking a total of over 12 million downloads.

For mobile developers (or at least the better ones amongst you), this means great opportunities ahead.

[Thanks to Wayne Soh for the heads-up]

Five Questions You Need To Ask When Scaling Your Business