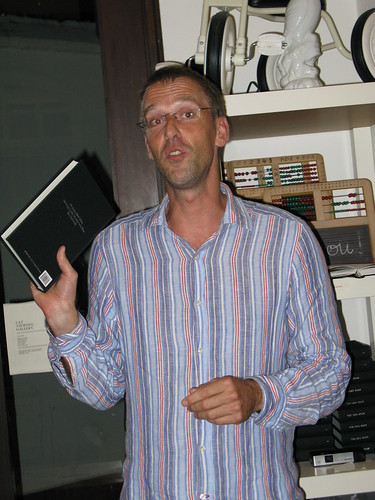 1. To date sold 150,000 copies in the author’s home country of Sweden,
2. Sold 3,000 copies in a month in Iceland (which in a country with a population of 300,000 makes it one for every 100 Icelanders),
3. Will be translated and launched in Iran, Sri Lanka and Laos before it hits the United States, France and Germany,
4. Was launched tonight in Singapore?

Fredrik Härén’s The Idea Book, that is.

Launching the book in the biggest bookstore in Singapore would have been the most logical thing to do, but that would have been out of character for Fredrik Härén – he’s one who’ve always tried to do things different. Instead he picked probably the smallest one – local independent bookstore Books Actually, which is tucked away in a quiet corner in Ann Siang Hill for his launch.

“We try to make (the book) different, sell it different(ly), and get people to use it in different ways,” Fredrik says.

The Idea Book is a combination of a motivational book on creativity and a notebook.  Fredrik shares that only 10 per cent of his book’s sales come from bookstores – the rest are sold directly to companies and organisations. The reason, he says, is quite simple. Companies have a very small budget for buying books. On the other hand, they have huge stationery budgets. So by positioning the unique duality of his book, he’s been able to convince many companies to buy it for their staff. He’s already sold 1,000 copies to a statutory board here in Singapore.

It’s one of those ideas that Kenny Leck, the owner of Books Actually, says “we’d wish we thought of but he beat us to it”.

Fredrik’s just moved to Singapore and the reason, he says, is because he’s going to set up base here and translate the book into more than 100 languages – such as Korean, for example. He’s on the lookout for people who are excellent translators who are passionate about books, so if you’re interested you can contact him at fredrik dot haren at interesting dot org.