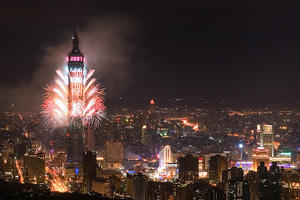 When we talked about Asia and Chinese Internet start-ups, we definitely cannot miss Taiwan. If you haven’t already known, renown tech brands like HTC, BenQ and Asus all originated from the country.

I had a chance to join a start-up event in Taipei last year and was amazed by the Taiwanese enthusiasm and creativity. It made me felt like I was in Silicon Valley. I also had the chance to meet Jamie Lin (image below), founding partner of appWorks Ventures, who took some time to share with us his thoughts on Taiwan’s tech start-ups and culture. But first, allow me to introduce Jamie.

Jamie is a successful serial entrepreneur. His first start-up, Hotcool.com, was founded back in 1999 when he was still a student. In 2006, while he was at New York, he founded Sosauce.com, a famous online community for tourists. He also founded 3D gaming site, Musegames.com and participated in various start-ups such as Richi, ezTable, Frenzoo, PathMotion and WhoWhatWhy.

In between his entrepreneurial endeavor, Jamie also had two short stints at venture capital where he had a good ride with HSS Ventures and All Asia Partners. His first investment also went on to IPO. He is now with appWorks Ventures, a venture capital fund which focuses on Chinese Internet start-ups and mobile phone applications.

Taiwan used to be a very entrepreneurial place. If you look at all the word-class high-tech companies, such as Foxconn, TSMC and HTC, most of them were created in the past 30 years. But for a various reasons, in the last 10 years, people started to become less adventurous and fewer people would choose to start companies. For those who do start their own companies, especially Internet-based companies, most of them are just doing it out of passion and most are just trying to survive financially. Before appWorks, there weren’t any VCs backing Internet start-ups in Taiwan, and it almost never occurred to them that they would one day be competing with their global counterparts.

2. Does Taiwan have all the infrastructure needed to succeed as a start-up nation? What is Taiwan lacking?

If we’re talking about building an Internet ecosystem, Taiwan has some of the ingredients needed to succeed as a start-up nation. We have very good talents. Taiwanese engineers are very well-trained, highly productive and their salaries are just 25% of those in Silicon Valley. We have a very advanced and vibrant e-commerce sector — it accounts for 1.1% of our GDP and that ratio is much higher than US, Europe or Japan. We also have great Internet and mobile user penetrations and customers are generally willing to pay.

Taiwan has very strong international computer and mobile devices brands, which could serve as a great distribution platform for young Internet companies here. However, we lack of Silicon Valley-based mentors. Successful entrepreneurs who have been there and done it could mentor and aid early-stage start-ups to scale faster. For example, people like Dick Costolo (CEO of Twitter) whom has brought the microblogging service to the next level. Last but not least, we also need more VCs to back Internet start-up ideas and the government to alter laws for more flexibility in the online space.

3. What are some promising tech start-ups in Taiwan?

I will name just two:

(2) EZTABLE : EZTABLE is a platform which helps users to book restaurants online. It had a great 2010 and is currently raising funds to scale globally this year.

4. What are appWorks’s investment criteria?

I usually look at the problem a start-up is trying to solve first. It’s crucial because it also represents the size of the market. Once we defined that, the market has to be big or at least fast growing. After which, I’ll understand more about the team, especially on their insights to solve the problem they have identified. The team needs to have the insights, skills and attitude to solve the problem better than others. Lastly on the solution (the product). It is important for start-ups to understand their competitors and differentiate from the crowd.

5. Can you give us your 3 best tips for budding entrepreneurs?

(1) Pick the problems you’re passionate about solving, especially the tough ones.

(2) Be obsessed with your domain and your competition.

(3) Get out of your comfort zone and explore all the things you’re not familiar with — be it female fashion, art or music instruments. You’d be amazed how these things can give you inspirations in solving your problem better.

This article was first published on Penn-Olson, a tech, business and marketing blog focusing on US and Asia. Penn-Olson is a Young Upstarts content partner.